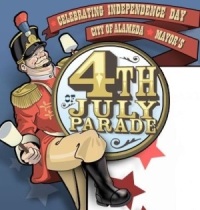 Fourth of July in Alameda is a terrific day to head downtown with family and friends to enjoy a good old-fashioned parade. Celebrate America’s birthday and show off your red, white, and blue while viewing one of the largest and longest Independence Day parades in the nation.

The Mayor’s Alameda 4th of July Parade started in 1976 and has become one of the best July 4th celebrations in the San Francisco Bay Area. The parade now boasts over 190 “floats” and over 2,500 participants that travel along a 3.3 mile route across Alameda – starting on Park Street in the East End and progressing all the way to Webster Street on the West End.

The holiday parade is sure to be fun for all. The procession includes a multitude of antique cars, hand-decorated flatbeds (“floats”), dancing horses, marching bands, dance troupes, cheer squads, bicyclists, musicians, costumed characters, and clowns.

Where’s the best place to view the Alameda 4th of July Parade? Our answer every year is… Park Street, between Lincoln and San Jose. 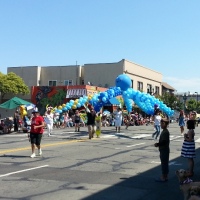 Here’s why we think Park Street is the best place to view the Alameda 4th of July Parade… The parade entrants start off with tons of energy along this first stretch of the parade route and they are positioned closer together. The rivalry for attention along Park Street can be very entertaining and there’s usually lots of candy handed out to the kids. Plus, the performances and the cheering in the parade tend to be best near the Judging Stand which is located on Park Street near the intersection of Alameda Avenue. Also, if you are looking for a refreshment or a snack (or want to do a little shopping), there are plenty of businesses that are open in Downtown Alameda’s Historic Park Street Business District.

For the optimal viewing experience, you’ll want to arrive well before the 10:00am start time to nab a “front row” seat along the sidewalk curbs on Park Street. But even after the parade begins, you should still be able to find standing room somewhere along Park Street. (Be warned, the parade usually clears Park Street by 11:30am.)

Enjoy the “small-town” feel that makes Alameda so special and celebrate a good old-fashioned Fourth of July — put on your red, white, and blue attire; grab the kids; invite the friends; and head to Downtown Alameda for the annual 4th of July parade. 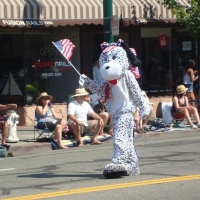 As we prepare for the upcoming Alameda 4th of July Parade and the annual celebration of our nation’s independence let’s also celebrate and support our local, independent businesses. Like our founding fathers, these businesses exemplify the spirit of individuality and economic prosperity.

So while you’re in Downtown Alameda, be sure to check out the “parade” of local shops and restaurants in the Historic Park Street Business District! You’ll find a number of coffee shops, sandwich shops, convenience shops, and dessert shops; breakfast places, lunch places, dinner places, and drink places; gift stores, book stores, apparel stores, antique stores, and children’s stores; and many, many helpful services!

The Park Street Business Association wishes you and your family a safe and enjoyable Fourth of July!

More Tips for the Alameda Parade 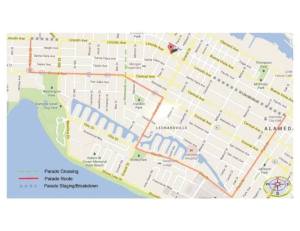 Parking: The Civic Center Parking Structure located at 1416 Oak Street between Central Ave and Santa Clara Ave is your best bet. The six-level parking facility features 341 parking spaces. Otherwise, parking can be found on the side streets if you arrive early enough.

Bicycles: There are plenty of bike racks located throughout the downtown area. Unofficially, there are also plenty of posts on the side streets to lock your bike. For those that use BikeLink, electronic bicycle lockers are available on the ground floor of the Civic Center Parking Structure.

Transit: AC Transit Line 51A will be running its normal holiday/weekend route along Santa Clara Ave with a stop near Park Street. Line 51A also connects to the Fruitvale, Downtown Oakland, and Rockridge BART stations.

The Park Street Business District offers great food & drink establishments, charming shops, friendly services, and fun things to do! To learn more about the businesses and events in Downtown Alameda, visit our website: www.ShopParkStreet.com/news. You can also find the “Park Street Business Association” on Facebook and Twitter.

Sign up for our Customer Club to receive event announcements and special offers from businesses in the Park Street Business District! Click Here