Decorating for the Lunar New Year in Downtown Alameda

As the Lunar New Year approaches, some of our downtown merchants can be seen decorating their businesses with lanterns, couplets, paper cuttings, and other items. Dazzling and glittering Chinese New Year decorations never fail to capture the magic and energy of this fabulous season.

Chinese New Year, also known as Spring Festival in China, is the most important traditional holiday in Chinese communities. It takes place on a different date each year because it is based on the lunar calendar, marking the ‘Start of Spring’. This year’s lunar new year begins on Saturday, January 28, 2017. It is said to be a powerful one, with no middle of the road when it comes to moving forward.

Be sure to look for colorful decorations when visiting some of the Asian-inspired restaurants, martial arts studios, and other businesses in Alameda’s downtown district.

It’s interesting to know that the decorations you may see also carry symbolic meaning:

Chinese Red Lanterns — Hanging a red lantern in front of the door is believed to drive off bad luck. During Chinese New Year it is not uncommon to see lanterns hung on business offices.

Door Couplets — New Year couplets contain brush works of Chinese calligraphy posted on each side of a door frame. The message on the couplets is filled with best wishes for the coming year. The couplets are thought to keep evil away.

Paper Cuttings — It is customary to display paper cutouts on windows during the Chinese New Year for luck and happiness. The theme of the New Year’s paper cutting typically contains the image of an auspicious plant or animal. The rooster is expected to be a popular image this year.

Upside-Down Fu Characters — The pasting of big diamonds of paper calligraphy with the “fu” Chinese character is deliberately inverted on or over doors. It means a business wishes for “good fortune” to “pour out” on them.

Blooming Flowers — Blooming flowers symbolize the coming of spring and the wishes for a prosperous new year. The most popular floral decorations for the New Year are branches of plum blossoms, orchids, peonies, and peach blossoms.

Roosters — With 2017 being the Year of the Rooster (fire rooster to be exact), you can expect to see plenty of decorations related to roosters — and chickens.

Every year, almost all the decorations involve the colors red and gold. That’s because red is regarded as the symbol of happiness and good luck, while gold symbolizes prosperity.

The Downtown Alameda Business Association wishes you and your family a year of prosperity and good fortune! 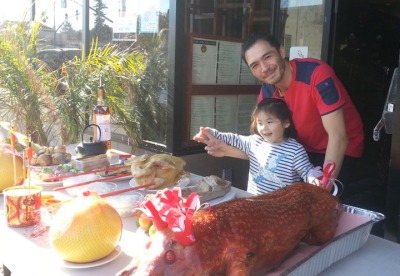 Downtown Tip: Monkey King at the Brewery will be welcoming in the lunar new year with a ceremony of blessing in the early afternoon on Saturday, January 18, 2017. Be sure to stop by to observe this cultural tradition.

Downtown Alameda is the commercial, cultural, and civic center of our island city. We represent over 425 businesses in the Historic Park Street District and nearby side streets. Follow us on your favorite social media sites for updates: Facebook, Twitter, Pinterest, Instagram, and Google+